The truth is that as stories, there’s not much in each game in itself. The pull back and forth, the tension of each turn, you can’t write those elements down and then turn it into fiction unless you wrote down every single card. We note down the major events and I’ll see if we can turn it into some kind of story. One thing we like is that apart from our victory being pretty good, a lot of what S2 assumes is true matches our S1, like the disease originating on the east coast of the US.

I am Wren, 5th degree Mason of the Green, and I am of the blood of the Builder.

It is the 71st year since the Fading Sickness ravaged the earth.  My great-grandfather, the one who is only ever called Mr Abotu, helped stop it from destroying everything.  What is left of the known world is a tenuous network of cities arrayed around what was once called the Atlantic Ocean, held together by the Havens he helped organise and build.  My home is named after him, and Port Abotu boasts the most beautiful habitats and most elegant hydroponics, and I am personally responsible for the design of the Great Desalination Plant, by the Grace of the Auspices.

To the north lies Angel Station, who follow the lessons of Dr Knight, and pass them on to the rest of the Grid to keep the peace and quiet.  To the east is Aegis Island, who stand watch against the Hollow Men and the raiders, mindful of the warning of the traitor Colonel Jones.  Angel Station creates, Port Abotu preserves, Aegis Island destroys.  Thus we keep the world safe.

And yet, we have had no word from our leaders, who were due back after the annual meeting.  My nephew PT has urged me to take the lead and represent Port Abotu for, while I am yet to reach the Inner Circle, none question my standing in the community.  I am to join the record-keeper Tell from Angel Station and the administrator Charlie from Aegis Island, both solid friends, to form a new Alpha Team to investigate.  Tell’s knowledge of the network and Dr Knight’s lessons will be invaluable, and Charlie has always been able to organise travel routes regardless of resources and weather, and I am truly glad to be with them.  But supplies of vaccines and food dwindle across our whole network, and the Fading Sickness is always ready to come back.  The Grid has to be kept safe, even as we risk travelling back into the ashes of the old North America to find word of our leaders.

My heart skips a beat as I wave goodbye to my husband and to my little girl.  I am of the blood of the Builder, and I am bold and ready, but where we tread is where the Fading Sickness started, and despite the ashes that fire may not be out…

They call me Tell, for that is my duty. And our Leaders are no more today, because they failed to tell us the truth. Supplies are at catastrophically low levels, and they hid this from us for too long. Our only option is to rediscover our world, whatever the cost. The Hollow Men are out there, but so is what they used to call Amrica. It is not enough to simply stop the plague from spreading; now we must explore the forgotten land.

We established a base in Washington, named for one of the old kings, and where we know the Fading Sickness did begin and end in the histories. But this month the ocean was our enemy as it so often is: as we built our base we got word that Tripoli was collapsing, and London too, as raiders stole resources and sickness spread. Our back up, Team Bravo, shored up Tripoli, while Charlie was airlifted to London. Even as we prepared to build a base in Lagos, it collapsed from disease but thankfully the people were soon resilient. The Quiet was with us.

And then it wasn’t. The ocean, demon that it is, struck again. Seeing our base, the Hollow Men struck at Washington, burned all the supplies. Disease sprung up. Facing the exposure, Mason Wren came away changed. They became anxious and deliberate, and from now they would leave no box unchecked, consider no base fixed until it was perfect. Charlie raced back to pull them out, and when we looked for escape routes, we made contact with Chicago. A new city on our map. And from there, word of others, like Los Angeles and Atlanta, cities lost without roads to reach them.

Everything is about the tyranny of distance in this world, and the Ocean that keeps us apart. While we built a base in Istanbul, preventing its fall, and finished our work in Lagos, London began collapse. That ancient city almost fell to the plague. Cairo too, we saw the dead begin to pile up, just like in the stories of the old times. We had new friends in Amrica, but so many were dying in the east. Our world is not stable. There is no future guaranteed, no secure path. We are not building a new garden but once again saving a world teetering on a brink of survival. Just as the old ones fought, we must fight. Or the world will truly vanish forever.

But we are ready. Already I have learnt to be a Supplier, mastering the networks our Leaders used. The Ocean will not beat us. We will survive. 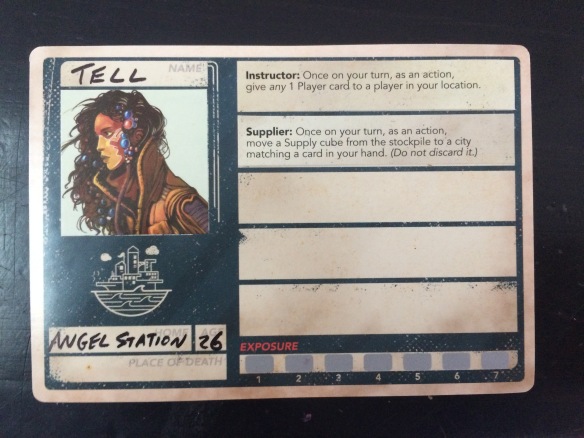 (I’m a bit disappointed we can’t name the cities we find. Maybe later? Everyone wants to build the setting as much as possible.)