One thing I’ve been doing with moving cities this past year is going through a great sort and purge, trying to get rid of some of the things I carry around, or at least tie them up in a crate and put them on a shelf somewhere. Along the way I found a lot of old RPGs. Some of them were finished, sort of, like Lock and Load the first game I completed, an action game about teams of superhuman killing machines. Then there was the dragon RPG that was inspired by TMNT so I was going to model everything from a dragon the size of a butterfly to one the size of a jetliner. It can’t be finished because there never was enough there. There was scribbled notes on a torn page for an RPG about the Darksword trilogy (my own, not the one they later made). Later, there was an epic game based around espionage and superheroes with a Palladium-cum-Warhammer system, complete with careers. Too much of it is lost now, but I learnt a lot coming up with all the careers. And I loved the way damage worked: melee weapons did roll 2d6 take the highest of the two, guns did roll 2d6 and add. So guns were more damaging but also more unpredictable. 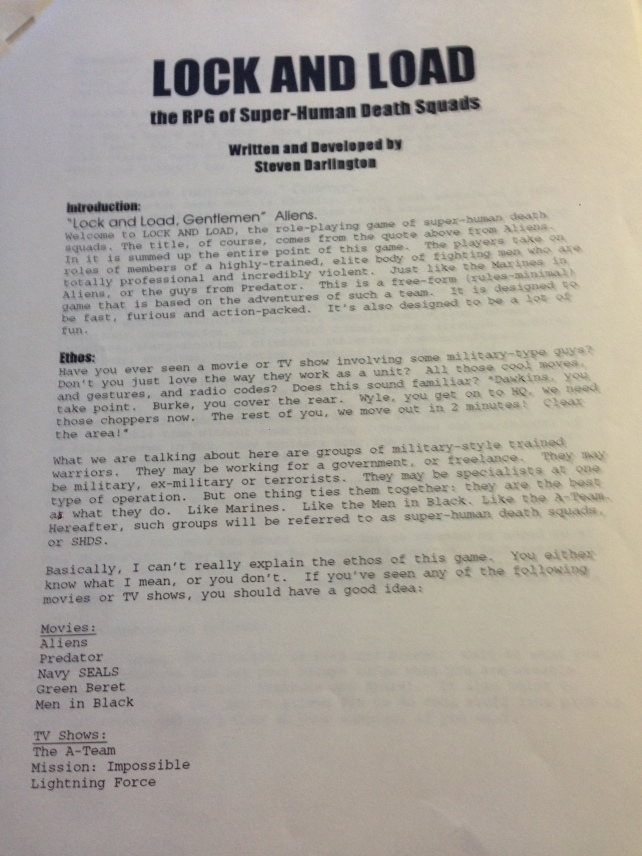 I’m pretty proud of this, the tone is excellent. But that is my forte. 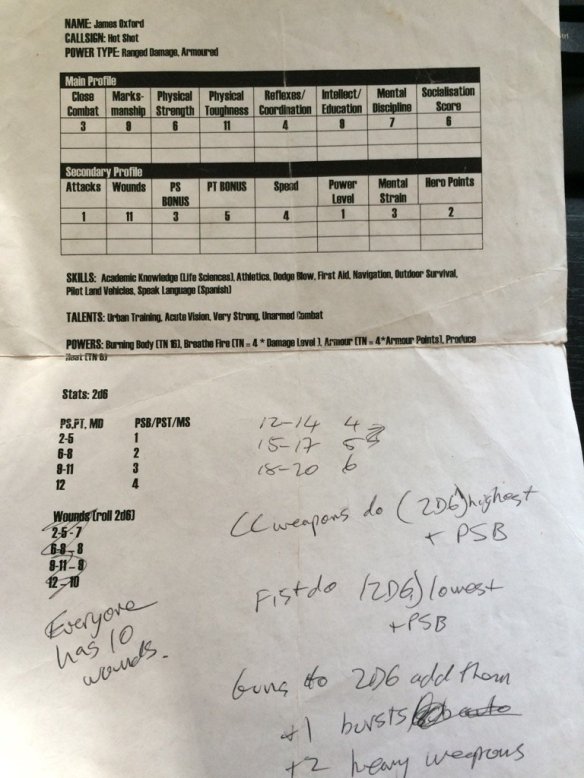 Socialisation Score is the worst stat name ever, but everything needed two letters.

Those have been lost to history, and can’t be finished. Too much doesn’t exist to be anything but a restart. But others I clung on to. After There Is No Spoon happened in 2003 when my depression momentarily un-fogged, things seemed possible so I started keeping them, even unto eternity, on the chance I might come back and finish. Snapdragons and Backwards are still in my head, and may still see the light of day. Until this year, the second-oldest project that was unfinished was the Estalia book, Swords of the South. Now it’s finished. That left just one still in my Inbox. It was a Firely game, alternatively called Fire of Fly, or Walk The Line.

The great Stephen J Cannell said that the best writing advice is to finish everything you start. Even your terrible ideas, because you learn more finishing them and trying to redeem them then you do if you abandon them, and because it teaches discipline and writing when it doesn’t feel fun. It’s good advice but it’s not always possible. Especially not when you move beyond writing; games are structures and if the house keeps falling over because the frame is broken or warped or absent, you have to abandon the house and start fresh. Some things get lost, too, in the ravages of time or suffering. Some things, like the Estalia project, are so tinged with mental trauma they can’t just be finished easily. Even just time and place is an issue: you can’t cross the same river twice, and the game you were building in this case eleven years ago just doesn’t exist any more. At that point doing much more to it is effectively rebuilding it.

To be honest – and that’s why I’m writing this, to let people see inside how messed-up and chaotic and fraught the process is – I’m really bad at finishing games in general. For a lot of reasons. Firstly because the more you finish the closer you get to success, and evaluation, and both of those are costly when played upon by my particular mental demons. The closer you get to finished the less perfect any creation becomes, the further it gets from the archetypal idea you envisioned, making it less and less fun to work on. For some this eventually turns into the joy of creation coming real, and it does for some projects, but not all of them.

There’s also the problem that finishing a game requires playtesting and I have enormous trouble putting my games out there to be tested for the same kind of reasons I don’t want them finished at all. Plus I’m generally pretty tired of GMing after doing it for 35 years and have only felt very rare desires to go back, and if you can’t GM your game, it’s really hard to test it. It’s also really hard to design it, because you’re trying to build a tool you won’t use.

But they say you shouldn’t focus on the obstacles. On the other hand, you should at least know what they are and understand them. And think of ways to trick your brain around them. I’ve been successful with that with some of the mini-games I left in the ashes. Some of them will be coming soon. Some I will hopefully be able to get back to. But I’m not sure what to do with my Firefly almost-game. I don’t want to rewrite it. I don’t want to take out the setting so I can’t sell it. So all I can really do is throw the pieces into one file and put it on line somewhere. Or some of the pieces, I’m not going to retype the hard copies where the soft copies are lost.

Some assembly required. Or perhaps, here’s a game that didn’t make it. Like the weird Sigourney Weaver clones in Alien Resurrection. Would anyone even be interested in that? If not, I’ll just assemble the barest bones I have and get that out. If I can. If I can safely.

Either way, this is kind of the introduction or foreword, and the beginning of the process of assemblage. I thought you’d appreciate the insight, and it helped me think out loud.

3 thoughts on “The Games That Were And Almost Were”